This vintage truck is a true oddball and wears its rusty patina well. • Our Bring a Trailer pick of the day is this 1962 Chevrolet Corvair 95 Rampside pickup, up for auction until Tuesday, March 22.

• This one’s a bit of a project as it needs some cosmetic and mechanical repairs to get it back into fighting shape.

• We love the vintage look and think the side-mounted ramp to the bed is a novel feature that might make sense on modern pickup trucks, too.

Today’s auction pick from the Bring a Trailer website—which, like Car and Driver, is part of Hearst Autos—is this old but cool 1962 Chevy Corvair 95 Rampside pickup truck. Okay, it’s a little rough around the edges, but hear us out: Small pickups are back in style. Right? And the Ford Maverick may wear a vintage name across its tailgate, but this old Chevy is actually vintage. 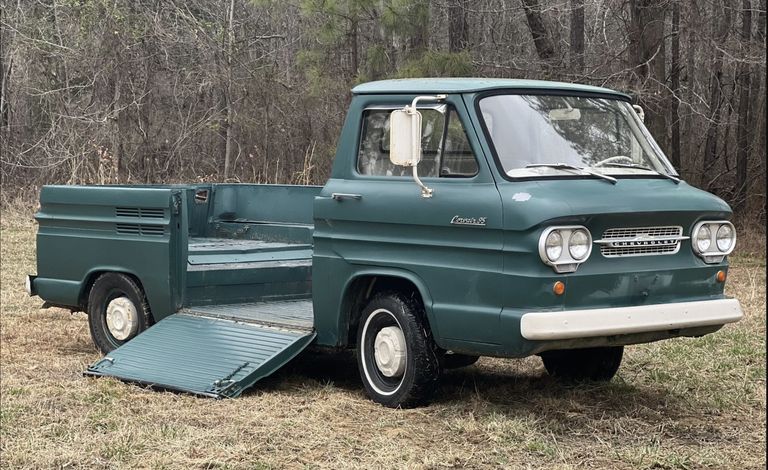 Originally part of Chevy’s lineup of rear-engined Corvairs, the Rampside pickup featured a side door that folded down to serve as a ramp, allowing cargo to be loaded into the bed right from the curb. Maybe such a feature could be added to improve the functionality of the next Silverado. The interior appears to be in pretty good shape for its age, and the gray and beige color scheme presents an appealing contrast with the truck’s green exterior color. There’s some rust, obviously, and the roof sports a smattering of rust, er, patina, but we think that’s part of the charm. It’s up to the buyer on whether or not to give the truck a respray, but we kind of dig the appearance as it is.

A horizontally opposed air-cooled flat-six engine, teamed with a three-speed manual transmission, drives the rear wheels. The engine is accessible by lifting a flap inside the bed. The engine made 80 horsepower when it was new, so don’t get any ideas of towing an Airstream trailer with this rig. 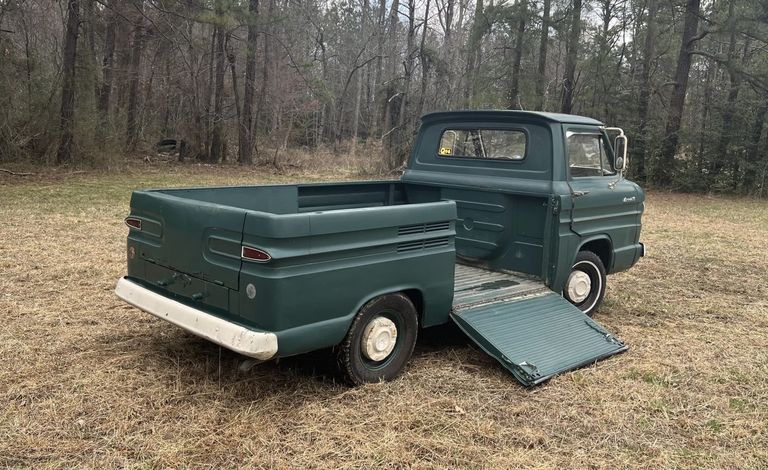 The seller has done some repairs to get it running for the sale, including replacing the fuel pump, carburetor, and brake lines, so a buyer can expect that the truck runs and drives. It’s going to need some work to make it truly roadworthy, but with that in mind, it will make anyone’s fleet a bit more distinctive. The auction ends on Tuesday, March 22, and with five days to go, bidding on this no-reserve truck was only at $4400.